Doing a New Years Resolution This Year? Give This A Read If You Want To Actually Stick To It This Year!

New Year’s resolutions are already being thought up of - whether it’s to lose weight, quit smoking, or stop drinking alcohol, give this article a read to increase your chances of getting to where you would like to be and prevent yourself from breaking the resolution in the first couple weeks of the new year!

It’s that time of the year again, January 1st rolls around and we all have the best intentions possible!

° Some of us want to exercise more

° Others want to cut out alcohol

° Some want to lose some of that weight around the midsection

But somehow we always fall back into the same routine and we end up forgetting about it after about a month. I want to provide you some tips and tricks you can do in order to stick with your goal, and help you understand why you lose focus, and what you can do to prevent yourself from falling into the yearly trap!

I believe there are 3 key points that we must touch on if we want to reach our goal of whatever it is we choose!

The FIRST point is our mindset.

The SECOND point is figuring out what drives us to reach this goal.

The THIRD point is figuring out HOW we are going to reach this goal.

Let’s get into it.

It’s a word that is commonly used in things such as everyday life, athletics, and in the workplace, but how important is it really?

Mindset is defined in the dictionary as:

This being said, let’s look at the FIRST part of the definition. An Individual’s attitude. I believe that if someone looks at their new years resolution as simply a goal to reach, they are destined to fail. A new years resolution needs to be looked at as a gradual change in lifestyle in order to reach the goal AND maintain that goal. For example, when you look at the goal of losing weight, it’s all to common for individuals to lose a certain amount of weight only to have a majority of it return (this is called the yo-yo effect). If we can change someone’s outlook from simply reaching their magic number and instead instill all the healthy tendencies and attitudes needed to live a healthy lifestyle, not only is that weightloss going to occur, it will allow you to do so without putting yourself on a unrealistic diet/exercise regime. It can also help to find another person with a similar attitude, in order to keep each other accountable!

This leads us into the second part of MINDSET – Inclination. As mentioned above, if we can change ones attitude from simply reaching their goal into instead, living a healthy lifestyle or living in a way that encourages the positive behaviours needed to get where they want to be; we can be more likely to have the inclination of choosing further beneficial choices which will snowball into further positive results towards our goal!

PART TWO – WHAT DRIVES US?

It’s not enough to simply say I want to lose weight for the sake of losing weight. I’m talking about something much deeper here. This is something that you need to understand and realize deep within yourself and you don’t need to tell anybody else this reason if you don’t want to!

This is something that is hard to explain so let me simply provide you an example. Let’s call a lady Linda. She is a 47 year old women with 3 kids and a husband at home. Her father was overweight and passed away at a young age due to heart disease. She used to be involved in sports but after having kids and living life she’s managed to gain more weight then she would like and is now looking to lose 34 pounds. After speaking with her we’ve come to the conclusion that she wants to lose this weight because she’s scared to death of the effects it’s going to have on her body over time. She has 3 young kids and is afraid that if she continues living the life she is, she won’t get to see her grandchildren grow up.

I know this seems like an extreme example but by finding out your deep reason for why you want to achieve what it is you want to – and either thinking about this each morning or having a reminder somewhere, you can prevent yourself from giving into bad habits or temptations and continue with your positive choices relating to your new change of lifestyle.

PART THREE – HOW ARE WE GOING TO DO IT?

We need a realistic approach for how we are going to reach our goal and adapt healthy changes. I believe that all too often people try to go too hard too quickly, leading to discouragement and ultimately failure. The common saying “Rome wasn’t built in a day” applies perfectly here. Whether you’re trying to get rid of some weight, or quit smoking, it’s important to do so in a way that encourages the most success. I can’t say one way is better then another but there’s two trains of thought here:

1. ALL IN: For some people this works great and if you’re reading this then you should have a pretty good idea of whether or not if when you start something new you stick with it or slowly phase out of it. Examples of previous experiences can include things such as learning an instrument, new language, or previous workout routines. Did you stick with them or did you phase out of them. If you’re the type of person who once they put their mind to something they stick with it then the all in approach may be for you! If not, read below.

2. SLOW AND STEADY WINS THE RACE: My personal philosophy is that by slowly making changes to your lifestyle, it’s easier to stick with them over time. This can be as small as switching your coke for a water with lunch, or instead of eating 2 pieces of toast every morning with your other breakfast foods – maybe only have 1! The choices and possibilities are endless but by slowly changing your habits your can begin to build a lifestyle that is sustainable for where you are right now!

This slow and steady approach can be used for working out as well. There was once a person who started his fitness journey by simply walking to the gym twice a week for a month. He didn’t even workout. He simply began to make going to the gym a habit. It was now something that he always did twice a week. It was a part of his routine. After about a month, he would now go to the gym, AND bike for 15 minutes, then leave. Eventually after a while he was then consistently working out twice a week every single week doing real workouts with weights, cardio and everything in between. Obviously this is an extreme case, but it goes to show that the important thing is to start your routine and stick to it. Choosing to go to the gym 5x a week after previously never having worked out is setting yourself up for a hard journey. Yes you may be able to get into shape much quicker but that’s only IF you stick with it. By easing into it you will have the same success but it will take longer, however, you will be more likely to stick to the journey rather than bail! I hope this has opened your eyes regarding new years resolutions and has provided useful information to allow you to find a goal, figure out why it’s important to you, and how to reach it and maintain it! I wish you the best success in the new year and I hope you can reach everything you set your mind too! Written by Andrew Blakey | Owner of Your Future Fitness | AndrewBlakey@YourFutureFitness.com
PrevPreviousHere’s a Workout You Can Do Over The Holidays With No Equipment!
NextCravings Can Kill A Fitness Goal, Here Are Healthy Alternatives For Popular Cravings!Next 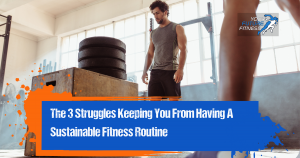 The 3 Struggles Keeping You From Having A Sustainable Fitness Routine

8 Best Ways To Deal With Your After Workout Sore Muscles

Stop wishing for results when it comes to your fit

When you’re starting your journey with healthy l

Work With Our Team!